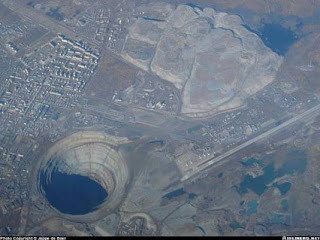 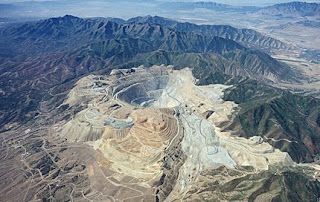 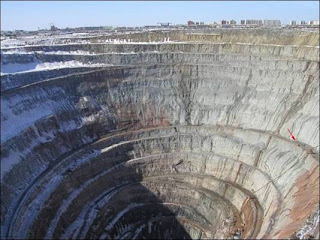 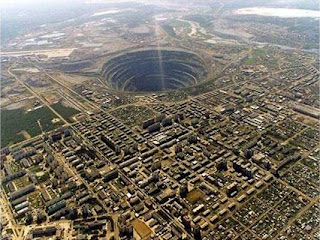 One of the world’s biggest holes is located in Russia.
The gaint hole is actually a diamond mine in Eastern Siberia near the town Mirna/?????? . It is 525 meters deep and 1.25 km in the diameter. Mirna’s open pit diamond mine closed operations in 2004 after nearly 50 years. According to bizarre reports air traffic has been suspended due to the “suction above the hole” reporting of extreme downdrafts over the pit.

Which some have claimed have resulted in several helicopter crashes.

Kennecott Mine. is actually the world’s largest man-made excavation. “Kennecott mine looks more like a huge canyon than it does a hole, as compared to the nearly-symmetrical pit in Siberia….Started over a hundred years ago, it pioneered open-pit mining operations. It is located 28 miles southwest of Salt Lake City. It’s 2.5 miles across and 3 quarters of a mile deep. The mine is so big that it can be easily seen from space shuttles in outer space with the naked eye. By comparison, the Mirna diamond mine is only about one-third of a mile deep and less than a mile across.” source

Kennecott Copper Mine, the world’s largest man-made excavation and first open-pit, is located 28 miles southwest of Salt Lake City. 2 ½-miles across, and ¾-mile deep, the mine is so big, it can be seen from space shuttles in outer space!!

Believes in one thing knowledge increases by sharing

sid
Like to read abt new tech gadgets and explore new things everywhere. I have special interests in Astronomy,computers and stock markets.